Luckytama (ラキたま Rakitama) is a male Cocotama who is the spirit of a colored pencil belonging to Kokoro Yotsuba, which her Grandma gave her. He is the mascot of the franchise, as well as being the main character in the anime series. His egg in the toy line is white.

Luckytama is very inquisitive and a little reckless. He can bring good luck, but sometimes he pushes his luck too much. He is clumsy and mischievous, but also tries his best to help out.

Luckytama is mostly orange with creamy white markings on his paws, tail, face, and eyebrows, making him look like a golden hamster. He has small, floppy ears and two big curls on top of his head. His eyes are blue. His tail looks like a pencil with a blue tip, and his pants have a symbol of a green four-leafed clover. 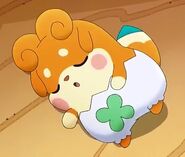 Plush of Luckytama, only available in prize machines

Add a photo to this gallery
Retrieved from "https://cocotama.fandom.com/wiki/Luckytama?oldid=7568"
Community content is available under CC-BY-SA unless otherwise noted.