Kokoro Yotsuba (四葉 こころ, Yotsuba Kokoro) is the main female human character in the Kami-sama Minarai: Himitsu no Cocotama anime. She is a fifth-grader, making her 10 years old.

Kokoro Yotsuba has dark brown hair tied in pigtails with pink ribbons, and brown eyes. She wears a long-sleeved yellow shirt with pink trim, buttons, and white lace around the collar, as well as a green four-leaf clover in the corner. She also wears a frilly, light blue skirt, white socks, and yellow shoes.

Kokoro Yotsuba is clumsy but kind-hearted and always takes care of her things, because her grandmother told her that everything has a soul. When she befriends the Cocotamas, she promises to never reveal them to anyone else and loves to watch them play. She likes to draw and her most cherished object is a green pencil, which is the object that Luckytama's spirit was born from. 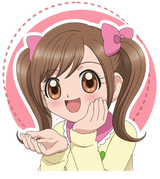 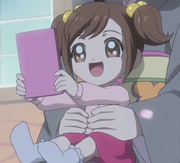 Kokoro in a physical education uniform

Kokoro and Nozomi in pajamas

Kokoro in a ski outfit

Kokoro in a spring/summer outfit

Kokoro in a winter outfit

Kokoro in a yukata outfit

Community content is available under CC-BY-SA unless otherwise noted.
Advertisement